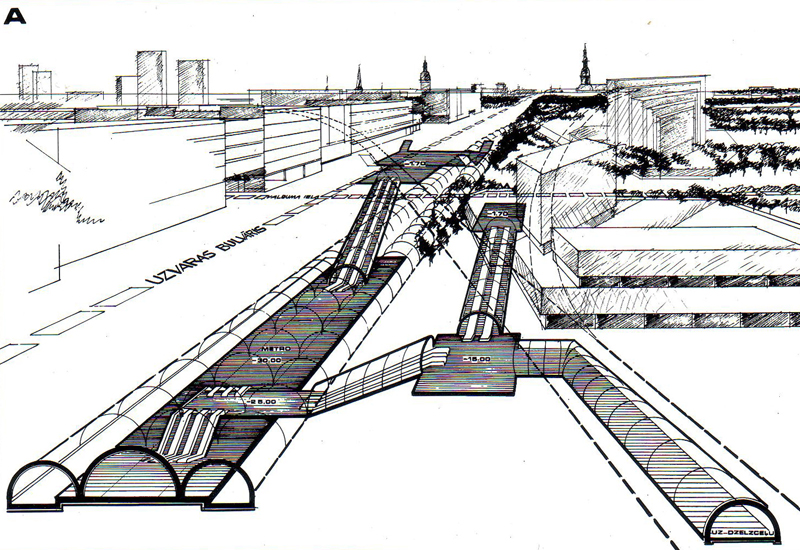 Public space, is continuously overcrowded in urbanised cities, but in shrinking cities has been left to deteriorate by conjunction, privatization, bad urban planning and design and overall neglect. But, by neglecting the public space, we are neglecting the people in it. One of the most vulnerable groups in the society is youth, as they use public spaces as a safe haven after school or university hours, to relax and enjoy themselves in a safe and socially inclusive environment. So, the question arises: Who are we planning our urban spaces for? And how can we cohesively plan our cities without a dialogue with all the stakeholders?

Youth is the group in the society that uses the public space frequently and eagerly. We can see them skateboarding and playing sports, riding bike, picnicking and just chilling with a book or in a group of friends. But nevertheless it seems that the public space functions for the youth aged 13-23 are being forgotten, once a new development project of public space is in works. Therefore, the public spaces, in Latvia are being developed for those who pay taxes (not every student has full or part time job), but do not necessarily represent majority of public space users – youth.
As a result of youth neglect that starts from local municipality level, a division in society has become more visible in 2016 in the EU – Brexit proved that youth, firstly, isn’t being heard and secondly, doesn’t believe that their voice will be heard. 75% of 18 to 24 year-old young people voted remain, but 16 and 17 year-olds weren’t allowed to cast their vote (as an exception for an issue that will directly influence not only them but next generations as well).
Even if there is a debate on the involvement of minors in the UK, the common feel of neglect is also present in Latvia. In 2013 Latvian Ministry of Education and Science published a research, which concluded that 68% of youth believes that their possibilities of being involved in political decision making processes were little to nonexistent. Unemployment, social inequality and limited opportunities for the young people to take part in policy and decision making are just some of the aspects that should make social cohesion an important topic across EU member states.
The street level is where a real, hands-on social cohesion starts (or is being killed). Therefore, local municipalities, being independent and locally focused, are a good platform to start to combat above mentioned issues. Nevertheless, City Councils are running away from the problems that are complex and don’t bring them short term economic benefits. This is why, the real force behind the change were, are and will be the local communities, NGOs, schools, youth centers, and other activist groups, especially in Eastern European countries.
In Riga, Latvia’s capital, there are about 650 000 inhabitants, but the number is shrinking and city center located houses are becoming more and more vacant. The amount of cars on the streets is increasing, new parking spots pop up frequently and residential areas are full of them, bike lanes don’t satisfy the demand, and new public development projects mostly are designed without including the opinion of all the stakeholders. The streets seem to be echoing the question: who (and why) are we building and designing the city for?!
In the last ten years, as Latvia has gained more confidence and knowledge from other EU member states. Many grassroot movements have fought for their space in the streets – skateboarding areas are now visible in parks and promenades, and communities are creating their local public spaces.

As a continuation of this broad grassroots movement, two local NGOs – environmental activism NGO homo ecos: (http://homoecos.lv/) and community NGO Sarkandaugavas Attistibas Biedriba (http://www.sarkandaugavai.lv/) – and a startup architect (Gunita Kulikovska) joined together in 2015 for a project “Green Manual for Youth Space”. Together with partners from Finland and Belarus, the project aimed to address set of smaller and bigger scale issues – youth involvement in the neighborhood life, their education about sustainable living, choice making, awareness and pro-activeness, local municipality´s involvement in youth issues, the roles of school and teacher in youth empowerment. All focus of the projects was given to Sarkandaugava, a blue collar district in Riga, with 17 000 inhabitants, which forms a socio-economically diverse local society. The outcome of the project is a manual for youth involvement in sustainable and innovative city development and empowerment of their skills and possibilities.

Project targeted two groups – 7th and 10th grade students and youth from 18 to 23 years. At the beginning of the project – March 2016 – the students (1st group) were educated on basic principles of group work, environment and sustainability in cities, digital communication, placemaking. They observed social and economic aspects in the city with professionals, lecturers, an urban researcher and an architect. Weekly workshops were held for three months, until the end of the spring semester. As a result, two main events were organised – pop-up intervention in deteriorated and traffic jammed center of Sarkandaugava district and, later, an exhibition in a nearby Aldaris park dedicated to participants’ vision on how the park would look like in 2020 from their individual perspective. Parallel to our activities, City Council made an open call for the Aldara park reconstruction, for Architects. Our activities gave us a wonderful opportunity to make a first connection directly between the students and the City Council. The Board had a chance to see what was the youth’s vision of the park and hopefully we will see some of this in 2020.
As the second part of the project, we organised youth international urban planning training between all project partner organisations. Young people from 18 to 23 from Latvia, Finland and Belarus for two days intensively worked with architects on placemaking, public space analysis and 1:1 modeling in Aldara park. Also, they took part in workshop dedicated to Green Manuals´ development, discussing the responsibilities and relationships between youth, professors, youth center workers and municipality that could work towards more inclusive and democratic urban planning.
And the main outcome – the Green Manual – as mentioned before, is focused on the most important issues for youth: empowerment, inclusion, prosperity, social and economic innovations and among others, safety. Executed as user friendly, visually engaging manual, it is targeted to municipalities, local NGOs, schools and everyone who is interested in the issue. As part of the The Manual, a web page will be launched, featuring more in-depth practical info and step by step guidelines to start the change, tools to raise awareness on Urban issues and learn from European cities’ experience. The Manual is set to launch soon, so stay tuned. We are keen to learn and to spread our knowledge!

Currently being Master’s student of Urban Planning in University of Latvia, Justine is diving into cities, spaces and communities. Her passion is about making connections – between facts, processes, spaces and people. One of her quests in life is to ask questions – why does it matter, who are involved, how can we develop it better etc. And recently, her mind has been occupied by a question: how can the youth become more empowered?